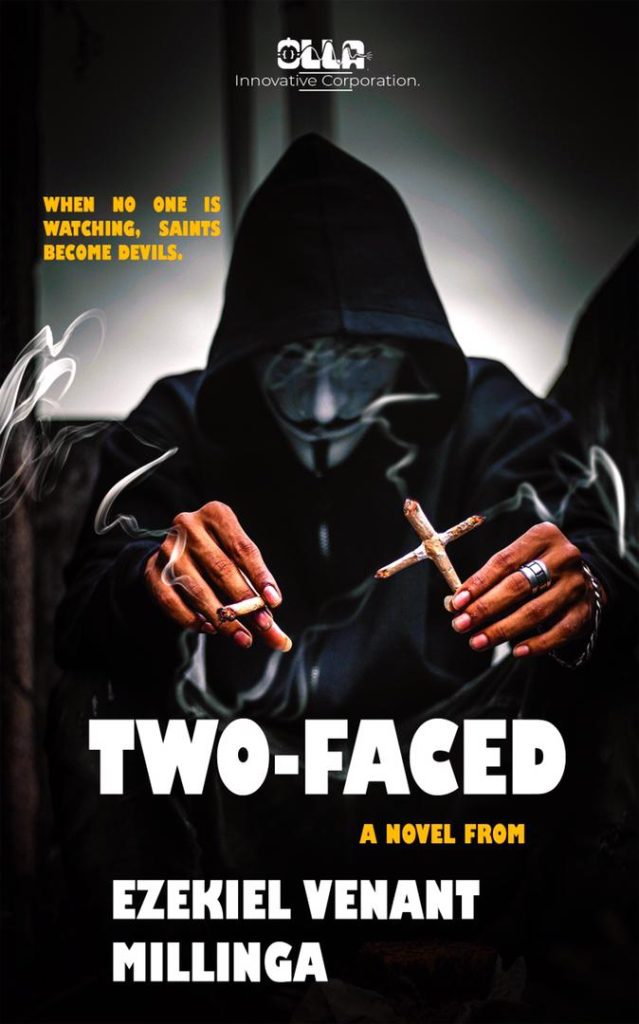 A Novel from Ezekiel Venant Millinga

Keiran Jones was born from spies but raised by patriots. He lives a very normal and peaceful life until two girls are reported missing, one being his girlfriend. Keiran vows to find the girls. On digging, he finds more, and because of that, he is intolerably wanted. He is on the run, with top-secret information in his possession, being furiously hunted by both, spies and patriots.

THURSDAY, DECEMBER 2
CHAPTER 1
It was 08:06 AM, and he wasn’t at the lecture room yet. If the lecture started at 08:00 AM, as usual, the old, stern professor was surely going to kick him out of the lecture hall before he even got a chance to sit. He had to try his luck though. Keiran increased his pace.

He reached the college gate at 08:11 AM. The banner hanging on the gate read Kilimanjaro Christian Medical University College (KCMUCo), with pictures of dressing codes. Keiran swiftly washed his hands. Few handwashes a day, keep the doctors away.

He entered the lecture hall at 08:14 AM through the back door. The old professor wasn’t there. He placed his hands on his hips, thumbs back. There were only a few students in the front rows of the lecture hall. It was a huge lecture hall taking the ground floor and the first floor. The hall had chairs arranged in two columns. The yellow chairs on the left column, and red chairs on the right column. Most boys and a few daring girls always sat on the red chairs, while most girls and a few daring boys always sat on the yellow chairs. No one designed the system, it occurred naturally.

Keiran walked down slowly and sat on the last chair of the row in the middle of the red chairs column. It was a place considered safe, a place free of questions from lecturers. He took his phone and opened WhatsApp, hoping to find a “No pathology lecture this morning” message. There was no such message from the MD2 WhatsApp group. His tongue rubbed his lips.

He replied to all messages on his WhatsApp and started viewing statuses. He viewed all WhatsApp statuses and shifted to Instagram. As he was exploring on Instagram, a WhatsApp message from the MD2 group popped up. He clicked the message.

Keiran Jones is needed at the Provost’s office right now. He read the message.

Keiran turned backward. The hall was now full of students. Everyone was staring at him. They saw the message. The provost…? How did the provost know my name? Why is the provost looking for me? He hadn’t committed any wild action he could remember. He massaged his left shoulder with his right hand.

He opened his lips slightly and gave a loud, short exhale and he knocked on the door. A response signaled him to enter. It was a huge, well-arranged office. The provost smiled as he entered. There was a Wyatt Callistus, Provost Nametag on his table. Next to Wyatt, there was a super short shaved hair black woman. She was a real definition of black beauty. She wasn’t a student, Keiran thought. How would a student wear a classic fit straight leg suit pant and be allowed to enter the campus? She wasn’t a lecturer too. How would an employee square her right ankle on her left knee, exposing her shoe sole in front of her boss? Who is the woman?

Are you Keiran? Wyatt Callistus said, signaling him to sit.

I heard you were Imogen’s girlfriend.

After she went missing and there was nothing that I could do, I was embarrassed to face her family. And you too. Wyatt said.

It wasn’t your fault, sir.

It has been four months. There is still no news about her whereabouts. I’m the one responsible for the welfare of all students here. How can her disappearance not be my fault?

The police are looking for her.

Stress lines dominated his forehead. He crossed his arms, holding the wrists.

Do you know Mia Cruz?

She’s nowhere to be seen too.

I received the news yesterday. We haven’t made an official announcement yet. We are afraid it will raise a commotion. You know, two girls missing within four months.

I understand, Sir, but why are you telling me this?

This woman here wanted to see you. He said, extending his hand, pointing all his fingers to the woman next to him.

Detective Penelope Nelson… The woman said as she stood, extending her hand to Keiran.

Keiran Jones. He stood and reciprocated the touch.

Why is the detective looking for me?

She thinks you can help.

She insisted that she would only talk about that to you, clandestinely. Keiran, if there is anything you can do to help her find these girls, please do so. Help me save this misery our university is facing.

Please listen to her first. I can’t face Mia’s parents telling them this news. Help me find the girl.

We’ve a lot to talk about. If you don’t mind, can we go have a little chat?

Penelope thanked Wyatt and signaled Keiran to follow her as she left the office. Keiran looked at Wyatt, Wyatt nodded. Keiran stood and followed Penelope.

He followed her to the parking lot where a white coupe, BMW 4 series parked.

Are we going for a ride? Keiran said.

Why did you ask for me? Keiran said soon after closing the door.

We both know why, Keiran? Penelope said.

How can a medical student help a detective?

We both know that you are more than just that.

What are you talking about?

I know the truth, Keiran.

Keiran chuckled, turning away from her.

I know everything, that’s why I came looking for you. Penelope said.

Then I’m sure you also know that I have an important task at hand.

Two girls are missing. This is an urgent task, Keiran.

I don’t quit important tasks because of urgent tasks.

One of the girls is your girlfriend.

I’m new here. If I need to solve this case as soon as possible, I need your help.

Keiran puffed out his cheeks.

Just today, Keiran. Orient me the place and from tomorrow, I’ll go on by my own.

Today and today only…

Where do we start?

I’ll start with you.

I need to know something about Mia Cruz before I start digging.

I don’t know much about her.

Tell me a little then.

She’s a hard person to define.

In the morning, her WhatsApp status is full of biblical quotes.

Is that your definition of hard to define?

In the night, her status is full of her pictures and videos in the nightclubs. Dancing, pipe-smoking… you mention.

Most people are not who they post to be.

People are fake in real life, not just on social media.

What about her relationship status?

She didn’t have a boyfriend?

None that I know… Most of my friends who hopped into her DM ended up with blue ticks.

You don’t want to know about Imogen? Keiran said.

Do you really want to talk about her? She said.

After she disappeared, I spent every day searching for her.

Keiran shook his head. It is as if she was swallowed by the land. Found not even a single clue about her whereabouts.

We will find her.

It has been four months!

I’m not embarrassed to tell you that I believe in miracles.

Keiran crimped the corners of his mouth.

I need to talk to Mia’s roommates.

It’s class hours. I doubt they will be there.

Let’s give it a try. You know her room?

Yeah…! I once went there to meet a friend.

Keiran led the way as they walked to Saint Stephen’s hostel. At the hostel’s gate, there was a black Land Cruiser V8. It was a car any medical student would grunt after seeing it, as a sign of appreciation.

Her room is on the third floor. Room SG 9. Keiran said as they entered the gate. Penelope followed him.

It was a modern hostel with three separate buildings under one fence. The first building was called block A. It was the most expensive block. The second building was called block B. It was the less expensive block. The third building, block C, was St. Stephen’s restaurant. Keiran used to have dinner sometimes with Imogen at the restaurant. After she went missing, he never came again to the restaurant.

They entered block B and walked up the stairs to the third floor. As they took a corner, a woman in a long black burka came out of the room, SG 9. She wore a black surgical mask making it intricate to see her face. She started walking away.

Keiran extended his arm, signaling Penelope to stop. He looked at Penelope and placed his index finger on his closed lips. Then he extended his chin, pointing it towards the girl in a black burka.

That person is not a woman… He said.

The person in black burka stopped. Maybe she heard. She turned around looking at Kerian and Penelope.